Is Starlink a threat to WISPs?

05 Sep Is Starlink a threat to WISPs?

Posted at 16:50h in Press Office by Admin 0 Comments
0 Likes

With Starlink’s LEO satellite services expected to be available in Southern Africa from late 2023, local and regional internet service providers ISPs and wireless internet service providers, WISPs are considering the impact on their markets and assessing to what extent this could potentially erode their current business models. By Dr. Dawie de Wet group CEO of QKON Africa and chief engineer for Twoobii.

As Elon Musk publicly stated at the Satellite 2020 Conference in Washington that “Starlink is not some huge threat to telcos,” we will not focus in this review on the high-density metro and residential areas serviced by fibre services. Instead, we will consider lower-density regional areas. To provide quantitative metrics, we will answer two questions: 1 How much capacity is required to serve a specific target area and 2 How many subscribers can be serviced in such an area? We will start by summarizing what is known from the Starlink network using general industry and academic papers and articles.

The network
Starlink is the LEO satellite constellation developed by Elan Musk’s SpaceX corporation. According to the Federal Communications Commission FCC filings, the Starlink constellation will include a total of 11,765 satellites an 340km, 550km and 1110km planes above earth. Starlink satellites will provide hexagonal signal coverage zones on the Earth’s surface with an estimated diameter per satellite of 25km and around 400km2 coverage per satellite, with bandwidth capacity of 20Gbps. The satellite fabric will not be uniformly distributed, as there will be different satellite densities closer to the poles than in equatorial regions. Since Southern Africa is neither at the poles nor the tropics, we will assume a uniform distribution of satellites to calculate a first-order capacity model. 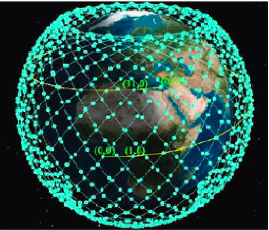 How many subscribers?
The theoretical maximum bandwidth per satellite is 20Gbps, which means that each satellite will then be able to service 2,000 subscribers at a speed of 10Mbps, with an average demand of 200GB per subscriber per month. At these metrics, the first-order prediction is that Starlink will be able to service some 564,706 subscribers, evenly spaced throughout Southern Africa.

Considering this possible half-million subscribers, it can reasonably be expected that Starlink will certainly impact the revenue of the smaller ISPs and WISPs, while it probably will not heavily impact telcos and mobile operators, as suggested by Musk’s Satellite 2020 statement.

Subscriber density
While network capacity provides us with an estimate of subscriber quantities, it does miss a critical point i.e., subscriber density. Since Starlink, and all other LEO satellite networks, will deploy cellular-type network architecture, it will exhibit similar network behaviour to mobile networks and therefore be affected by cell loading and cell congestion.

The estimate of 564,706 possible subscribers is based on an evenly distributed loading and does not take into effect the potential “loss” of service due to some cell areas being congested while others are underpopulated.

During a recent presentation in India, a Starlink representative provided some insight into the recommended subscriber rollout density by defining the 100in300 rule of thumb, meaning 100 subscribers in a 300km2 area.

Interestingly, if we apply this rule to our previous prediction, then the 564,706 subscribers would be spread over an area of some 1.6million km2. Given that the area of Southern Africa is around a 1.2million km2, this would undoubtedly appear feasible. 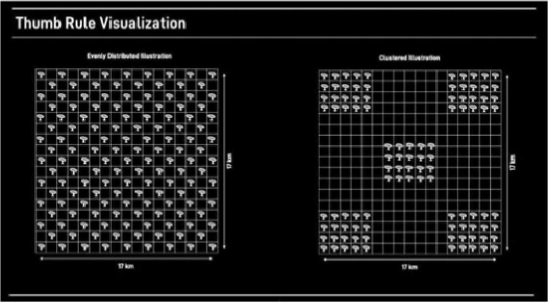 Conclusion – Will Starlink affect WISPs?
In a word, yes Starlink will certainly affect not only WISP’s, but also all other service providers due to the introduction of a completely new perspective on, and expectations for, broadband access services.

If we rephrase the question as, will Starlink jeopardize and undermine the business of WISPs and regional ISPs, then the answer becomes more nuanced. As Starlink will probably be guided in its rollout by the 100in300 rule-of-thumb, the company will necessarily have to target lower-density areas.

These areas are probably not currently serviced by a regional fixed wireless network or fibre networks. From this perspective, Starlink will actually develop a market sector that is currently underserved and will therefore add to the overall revenue pool rather than diminishing it.

It can be reasonably anticipated that Starlink will make significant investments in marketing and advertising ahead of and beyond their entry into Southern Africa. This will raise awareness of the potential of satellite connectivity solutions in general, so there may be some tangential benefits to existing players, although these will be difficult to quantify.

Considering future business strategies and options in a “Starlinkalso” marketplace, WISPs, Regional Service Providers and ICT providers will do well to align with specialist satellite service providers so that they can move closer to the technology and be better informed of upcoming opportunities and threats.

Q-KON Africa operates the Twoobii Smart Satellite Service platform which provides broadband services, plus the additional value-added services required to ensure customer satisfaction and revenue retention. Considered as a prelude to the services and technologies which are being developed, Twoobii’s Smart Satellite Service provides a powerful business case for building a competitive capability, another arrow in a “quiver” of connectivity services, for the coming New Space industry. Twoobii is focused on the business broadband sector and is fully capable of both coexisting in, and seamlessly enabling, any future satellite industry landscape that includes Starlink.