What does Project Kuiper mean for Africa?

12 Aug What does Project Kuiper mean for Africa?

Posted at 12:00h in Case Studies by WDDTwoobii_Admin 0 Comments
0 Likes

On 30 July 2020, the Federal Communications Commission (FCC) granted Amazon approval to deploy and operate Project Kuiper, a constellation of 3,236 LEO satellites. The authorization allows Project Kuiper to deliver satellite-based broadband services helping expand internet access to households and communities. A project of this scale requires significant effort and resources, and, due to the nature of LEO constellations, it is not the kind of initiative that can start small. You have to commit. Amazon will invest more than $10 billion in Project Kuiper.

The communication satellite industry started in 1962, almost 60 years ago, with the launch of Telstar1 by AT&T and Bell Laboratories. Today, many end-users and network architects consider satellite as an “old” technology which is rapidly being replaced by fibre and 5G. The reality is actually completely the opposite.

Actually, the satellite industry is currently benefitting from mega innovations with more constellation innovations set to enter the industry in the near future. Several leading projects have already been announced, including StarLink from SpaceX, Telesat, OneWeb under new funding, and now also Amazon’s Project Kuiper.

What is Project Kuiper?

Project Kuiper is a concept plan for implementing 3236 LEO (Low Earth Orbiting) satellites, with the 1st launch planned for 2026 and the remaining satellites launched by 2029. The design life of these satellites is 7 years, with 784 satellites planned at 590km above earth, 1296 at 610km and 1156 satellite at 630km. While key operational and design elements such as frequency interference, impact on space observation and space debris risks remain to be resolved, Amazon has now officially entered the race to develop LEO satellite communication services.

Who is the customer?

While the FCC filings for the recent new LEO constellations (StarLink, OneWeb and now Kuiper) motivate broadband services to the mass population as the core justification, this is probably not the most feasible service in the early stages. One of the key unknown elements at the moment is the design for cost-effective end-user terminals which are required to unlock a mass consumer market. Current antenna designs suited for LEO constellations are by far too expensive and no material cost reduction has yet been achieved.

Thus, to unlock the biggest benefit of LEO constellations – i.e. a latency of less than 50m sec for anywhere-to-anywhere communication – and to offset the expected high cost of end-user terminals, it is more likely that the initial target market would be business operations and even fibre replacement services for lower density business regions that lack the justification for fibre network implementation.

Will Kuiper be available in Africa?

The FCC filing submission-only referred to the North American market, yet once the Kuiper network is operational it will cover the globe, and services will be available in Africa. Add to this the large potential market offered by Africa, and it can be expected that Amazon will strive to enter Africa and other emerging markets.

The question then is rather What will it take to deliver Kuiper service in Africa?

To provide input on this question we will briefly note thoughts applicable to a simplified business model integrating the fields of Technology: Market and Delivery. 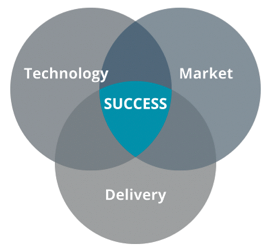 The technology certainly holds big potential for Africa and will meet various connectivity demands. Satellite technology has proved to be a very reliable solution and the latest innovations in LEO constellation developments will leapfrog past current cost and latency constraints.

While technology is the most impressive innovation element, it is probably not the most difficult to achieve and Kuiper will be demonstrated in the North America markets. For Africa, the technology required will thus be a given and proven option.

Market demand is a bit more complex discussion and relates more to the detail metrics of the market. It is somewhat of an oversimplification just to quote general statistics of the “unconnected population” in Africa and then assume this as the addressable market. Feasibility of the market lies in details relating to the type of service, the affordability of the service, the competitive positioning etc.

The Kuiper filing quotes a user target of 1 million, and if Africa is estimated at only 10%, then to secure a market footprint of 100,000 for these services will be very feasible.

Delivery is probably the most critical requirement and also the most challenging. Delivery includes service provider business models, the different local telecommunication regulatory requirements, operational models required for such a specialist technology service, delivery, implementation and support of 100,000 end-points etc.

At an end-user price of $100, the annual revenue will be R2.4bn. Putting this in context, this will be about 2% of Vodacom’s 2020 revenue. Thus, for the big telco’s this will probably not be considered attractive enough to invest the resources required for such a specialized satellite service product.

Given the expected technical speed and latency performance advantages of Kuiper, and the benefits of connecting all “off-grid” users as well as providing a highly reliable, easy to deploy fibre-alternative service, this builds a compelling case for Kuiper which Africa can’t ignore.

It can thus be expected that a new generation of highly focussed, niche satellite service providers will target this opportunity. For providers such as the Q-KON group, who is already leading this market sector with the current HTS satellite services products, this will be a logical next step in meeting the ever-growing demand for trusted broadband services in Africa.